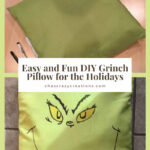 Do you want a DIY Grinch craft? I was at IKEA and found a pillow there on clearance for $2.  I brought it home and turned it into a Grinch pillow for the holidays!

I turned my pillow so my Grinch would be inside a diamond shape to fit the appearance of his face.  I started by drawing a nose in the center of my pillow so I could work my way out and I used a dry erase marker in case I didn’t like something.  Then I could wash the pillow and start over.

I next drew on the eyes and eyebrows around the nose.

I added his mouth.

I traced over all of the dry erase markers with a permanent marker.

I filled in his eyebrows lightly.

I colored his eyes red to match the movie when he is mischievous.

I added a Santa hat to the top of his head and he was finished.  You could glue or sew this hat into place but I opted not to because…

I drew a face on the other side so we could have him up longer than just the holiday season.  Now we can celebrate Dr. Seuss Day as well. If you like this you may like some of my other pillow projects or other holiday projects.

Is the Grinch the bad guy?

The Grinch stars as the villain in The Grinch Who Stole Christmas and once he realizes the spirit of Christmas has a change of heart and loses his grumpiness.

Why is the Grinch the only Green who?

The Grinch was actually black and white in the book. When Chuck Jones was commissioned to illustrate The Grinch for the movie, the rumor has it that he was inspired by his green rental car.

When was the grinch written?

The Grinch Who Stole Christmas was written May 1957.

What does the grinch eat?

The Grinch eats Who Pudding and Rare Who Roast Beast.

What is the Grinch’s real name?

The Grinch’s real name is “The Grinch”.