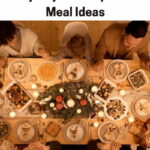 Do you want to plan an out-of-this-world meal? Something that says “Thank you for making my day extra special?”

Thanksgiving might be done and dusted, but the holidays are coming around the corner and, with them, Christmas dinner. If you want to make that meal a little more special, here are ways to spice up or take a different approach to each of the main components.

A nice big tub of steaming mash can be a mouthwatering sight. However, if you’re a little sick of the traditional way of doing it, then why not try a scalloped potatoes recipe, instead? With this approach, you cook the potatoes in nice and thin slices, put them in a casserole dish, then add a seasoned onion cream, baking them for a crispy finish on top with a great taste that elevates the potatoes beyond the norm.

When it comes to turkey (the traditional choice of bird for the holidays) then you need a good dark gravy to go with it. Rather than making it from the granules that you can buy in the store, it doesn’t take a ton of effort to make it from the turkey that you’re cooking. In fact, you can make delicious turkey gravy using the pan drippings when you’re cooking the bird itself. You can add some seasonings such as sage to bring a little more dimension to the flavors, as well.

In households that have discovered this particular method, it tends to become an annual staple, but there are still many that haven’t yet tried a coca-cola ham. When you slow cook a ham, whatever you cook it intends to soak right through the meat, flavoring it evenly throughout. Honey mustard is a common choice, but a two-liter bottle of any kind of cola is going to be more than enough to offer that ham a nice, deep bath. When that succulent ham releases the sweetness that has been cooked into it, you might not want to cook it any other way ever again.

Of course, you can’t talk about Christmas dinner without talking about the start of the show: the bird. Traditionally, it’s a turkey, but the following approach can help to liven up the flavor of any bird. A lot of people find that turkey can be a little dry and bland in flavor. Turkey does have its own flavor, but you can bring it out in the method by which you cook it. In particular, learning how to smoke turkey not only makes it more flavorful but also a little more convenient to cook. If you’re sick of the traditional approach to turkey, this can help.

There isn’t a ton that needs to be done to stuffing to make it special. If you make it at home and actually stuff your bird with it, it tends to come out delicious. However, that doesn’t mean that you can’t play with it a little to see what other flavors you can add. Stuffing is all about the ingredients that you use. Sage, onion, sausage, and breadcrumbs tend to best the most popular, but this oyster stuffing takes things into a whole new taste dimension.

If there’s one word to describe Christmas dinner, heavy is that word. As such, it can definitely help to lighten things up with a salad. However, who is going to want to go for the traditional salad when there’s all that delicious savory food to shove down their gullet? Take an approach that uses traditional Christmas flavors that are complementary to things like turkey and gravy, instead, like with this cranberry salad. That tartness and sweetness of cranberry are great for cutting through all the fat and stodge.

A casserole is often found on the Christmas table right beside the potatoes. It’s another thick, hearty scooped serving that you can use to add different flavors than the potatoes. If you want to serve a casserole that’s a little different, it doesn’t take all that much effort. In fact, this approach to hash brown casserole makes use of frozen hash browns, which might even remove some of the efforts. Of course, you can use freshly made hash browns but you might be surprised how welcome that extra savory touch can be.

Of course, doing all of the above can be incredibly demanding, more than anyone is willing to deal with on the big day. For that reason, just choose one or two things to make extra special, and take your usual route with the other ingredients.