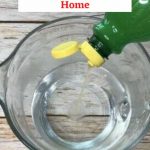 How to get rid of bad odors in your house? Bad smells, foul odors, and unpleasant smells … yuck. Odor problems lurk everywhere and we want to get rid of them as soon as possible. There are some simple steps to tackle those unwanted scents. I’m sharing the best way to remove odors around your home with some unique odor eliminators.

Let’s start in our kitchen, this is probably the biggest source of poor indoor air quality – smells from cooking, trash cans, garbage disposals, etc. Even after a thorough cleaning, you can be left with unpleasant odors because the problem areas may not be part of your cleaning regimen on a regular basis.

How To Remove Odors Around Your Home

A Quick Fix for Microwave Odor-

To clean and deodorize your microwave, make a solution of water and lemon juice.

Place it in your microwave and run for 5 minutes. Your microwave will have the fresh scent of lemon and will be easy to wipe out from the steam created.

A good way to get rid of offensive odors in the kitchen is to use natural remedies. Cut an orange, add cinnamon sticks, and water to a small slow cooker. Plug in and let it simmer all day to fill your kitchen with pleasant smells. Make sure to check the water level occasionally as the water will cook out and you might need to add more.

Before washing your dishes, flip one of the dirty glasses upside down and add a cup of white vinegar.

Place it on the top rack. Close and run your dishwasher as usual. Your dishwasher will come out smelling clean and the vinegar also acts as a spot remover.

When putting in a fresh bag, add a little baking soda to the bottom to eat up those strong odors in your garbage can.

Often furniture can develop a musty smell, especially a piece that is closed. Clean the furniture with a 1:10 ratio of vinegar to the water.

After that dries, for the best result, place an open box of baking soda with the furniture to continue to absorb any lingering odor.

Add a couple of drops of essential oil on a light bulb when it’s off and let it dry completely.

When you turn on the light it will warm the essential oils and freshen the room.

So many commercial air fresheners have a strong, unnatural scent. Fill a spray bottle with water and add a little baking vanilla extract to the bottle.

Use the spray in your rooms to give them a fresh vanilla smell.

Odors that offend inside your home:

How To Remove Odors Around Your Home Video

Learn more about “Why to Deep Clean and Organize Your Home” to save money, function better, and keep your sanity.

Coconut Oil Hacks To the Rescue!

11 Hairspray Hacks For Your Home

14 Helpful Sponge Hacks & How To Clean It